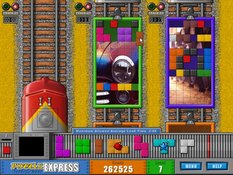 Puzzle Express has a very similar gameplay to the world famous Tetris. Although certain aspects have been changed, the level of addiction remains practically the same.

After starting the first game, you won't be able to stop until you reach as many levels as you can. In this case, by placing the colorful pieces you will begin to clear a photograph that initially remained hidden. You will get a higher score if you finish the levels in the shortest time possible, being able to write your name in the official ranking.

Puzzle Express offers you two game modes, although the combinations are practically infinite due to the possibility of downloading all the images you want, thus expanding the levels initially present.